We wish everyone to meet one of those unforgettable, luminous personalities that mark you for life. These people we often think about and will never forget even if oceans separate us. For us, since 2013, Anatole Gouba is one of them.

[ Finding your way between hope and chaos ]

Anatole was born 50 years ago in Upper Volta, long before the country became Burkina Faso, the “country of upright men”. By discovering his path and choices, one can say that the surname of his country fits him like a glove.

After graduating from high school, he was ready to reach the university thanks to a scholarship. This support needed for the young man born into a modest family escapes him because of a weird law granting it exclusively to the natives of the last three months of the year…. And Anatole was born in July! Frustrated, he gets a small contract and works for the Ministry of Agriculture. Almost 2 years after the graduation, the State rectified the situation and offered him the possibility of entering English courses at the university. Moved on, unmotivated and not very assiduous, it does not validate the diploma.

In 1994, full of hope, he flies to Frankfurt… Two weeks after his arrival, the visa for Germany became mandatory. Then, two choices are left: return home or ask for political asylum. Not resigned but upright, Anatole seeks another way. Working as a part-time cook, he enrols in ASV Cologne and runs his first marathon in 1996. The following year, he breaks the Burkinabe record at the Frankfurt marathon in 2h37mn. Anatole has found his way. 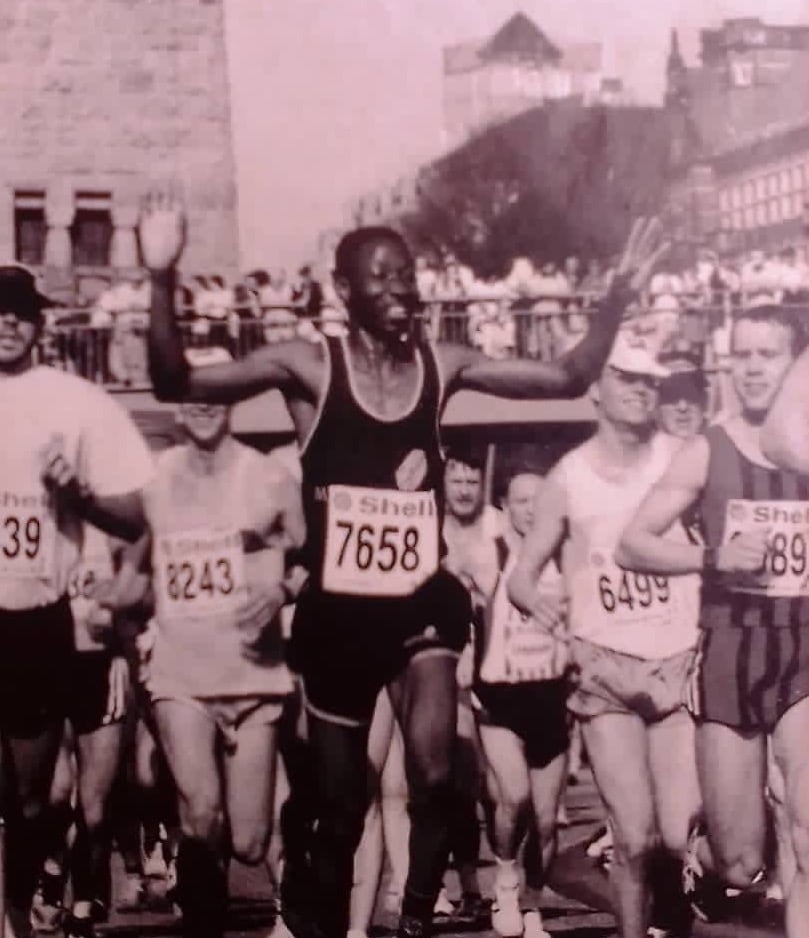 But he has no residence permit, no money and contrary to common practice, he does not plan to marry in Germany in order to stay. With frankness, he recalls his return to Burkina Faso.

“When you leave, nobody knows you are going to Europe. But when you come back, everyone is waiting for your arrival… like the Messiah. Shame on you if you have not “succeeded”. Learning to run instead of making money, what a fool! It is better not to return empty-handed, everything is only contempt because you did not save your family from misery. If the Europeans knew how the return journey was going…”

Destabilized, Anatole did dozens of small jobs during the following years. Until 2003, when he met and married the woman who shares his life, they lived “a gypsy’s life” until their son was born in 2004. On the race side, only emptiness! The marathon did not exist at that time in Burkina Faso. Anatole ran the first real marathon in his country in 2008 and placed second at the age of 38.

Despite adversity and true to himself, he never gives up and even see running as a unifying tool in a country where many ethnicities rub shoulders. He belongs to the Bissa group but the long walking of Mossi ancestors is part of the history of the country. In 2013, Anatole asked for and received the support of the king of the Mossi group to run alone this 7-day race over 360 kilometers. At every stop on the way, the questions are multiplying. At the end of the path, he was finally welcomed with honours.

“For some, it was madness, for others, it was hiding something. Most were shocked because walking seemed insane or mysterious to them».

Since then, Anatole has run and always finished in the top 5 of the Burkinabe marathons. Thanks to a few bonuses, his wife was able to return to the school she had left in the secondary school and get her graduation at age 30 in 2011.  He is proud (and he is right) that she also passed an examination allowing her to work for the Ministry of Health.

2013 was a turning point for Canal Aventure and Anatole Gouba. After the first edition of the Ultra AFRICA Race in Cameroon, we were organizing the second edition for the first time in Burkina Faso and he “discovered that I was not the only fool who loves running”.

Anatole ran two races with us in Burkina in 2013 and 2015. The political context led us to cancel the event in 2014 and prevented us from continuing the adventure there. But he does not forget his friends came here to run like him.

“It was like a consecration, a success. It changed the looks… A lot thought that running with people coming from so far meant that I was a rich man”. Since, photos of the races never quit his backpack, like a testimony. “Today, I got proof that my compatriots are late. To understand, they need to see white people running by my side and to believe that I win money with that. They are wrong but I prefer that”.

When he talks about « understand », Anatole is referring to the value of sports. He confesses “sport is a part of me. I run for life” and knows that being healthy without any medication at his age feeds the debate. He explains how the lack of physical activity became a deep public health question in the country. New diseases appeared like diabetes or high blood pressure.

“Advantages and risks of modern food are not considered. Obesity was a sign of wealth in the eighties. We just begin to understand the significance of sports but here, a lot of people could not move for 50 meters without their motorbike!” Even if the interest for running is growing, he underlines “unique fifty years Burkinabe athlete still devoted to marathon, I seem mysterious”.

[ These ultramarathons have changed my life ]

Talking about our adventures in 2013 and 2015, Anatole rapidly gives a long list of names and surnames. He will not forget to thank “all those who shared equipment because I had not”. He says that he met fabulous persons and is fulfilled: “I can’t write to all but they all are in my heart”. Aimé, Pedro, Juan, the Hendricks, Isange and staff of Canal Aventure and André who allowed him to reach Guinea for a marathon… and most of all his dear friend Ita (Marzotto) who « gave me the Ultra Africa in 2015 » and helped him when his dad died last year.

“Her words of hope are etched in my mind. I feel like a Thai, living every day with a smile. Even when I cry, I smile and socially, it is interpreted as a success”.

All those who lived the adventure with us will be happy to know that – due to the professional situation of his wife – Anatole will soon take honour in English and could become a teacher… with endurance, in regular steps, with passion and patience in the same time, just like he is.