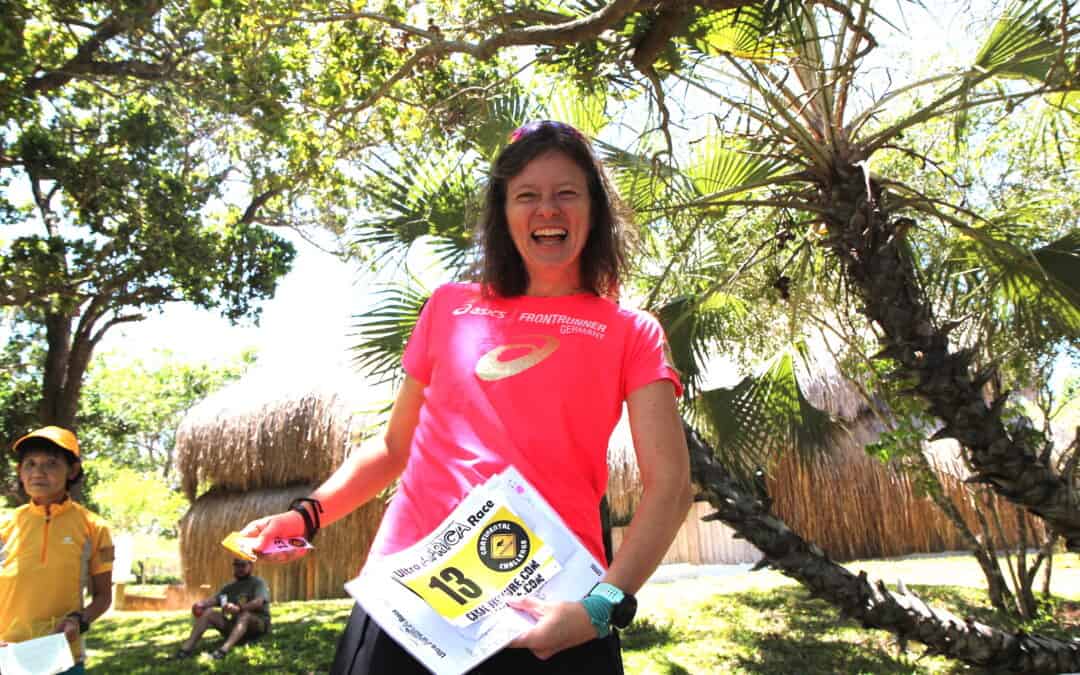 Andréa participated in 17 races, marathons, half marathons and ultramarathons in 2017. Obviously, she likes it and ended the year by running the Ultra AFRICA Race in Mozambique. But surpassing oneself is not her sole motivation …

Andréa is the deputy director of the Center for Holocaust at the Institute of Contemporary History of Munich. This very serious and significant work drives her in every corner of the world for conferences or collaborations on international projects. “It allows me to do my morning runs in very special places while my colleagues do only see conference rooms in Paris, London, New York or Jerusalem”. So, curious Andréa gets organized to make of her lives of historian and sportswoman a unique and beautiful adventure.

Young, she played basketball but did not run. At 30, a doctor said that she needs surgery at both hips. Luckily, another one advised her to do sports. So, she discovered the race. It was 14 years ago. Since then, Andréa understood that the race made her terribly happy, especially when it comes along with a journey off the beaten track. 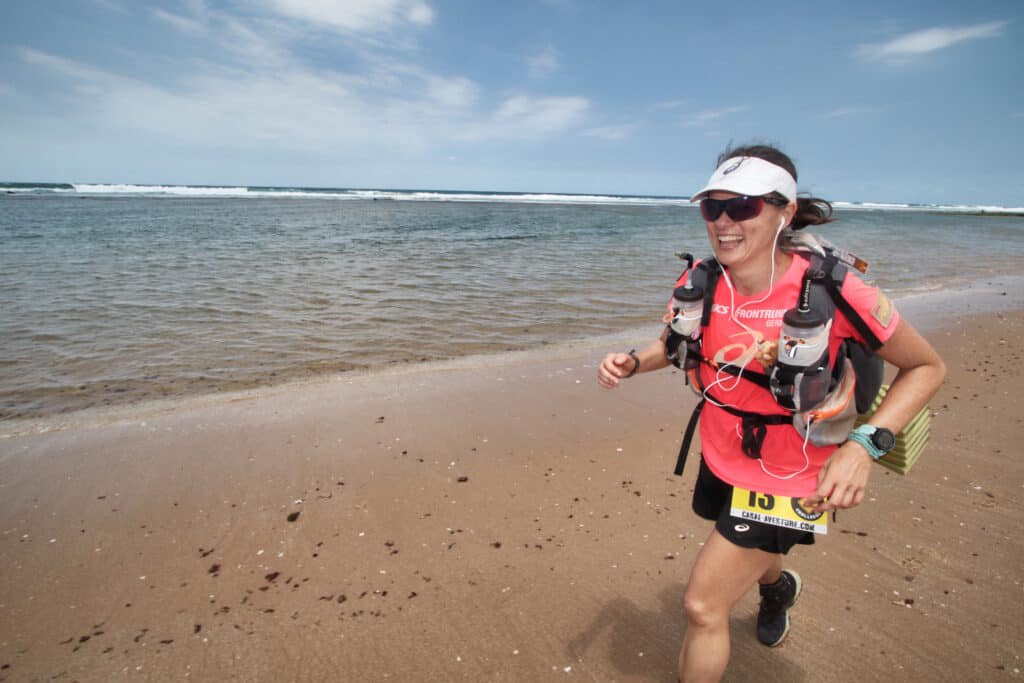 “I love running and travelling. I really want to run the world”. Discover places where the tourists would never go, that is what makes her so enthusiastic. She hurries to say that on this point, her escapade in Mozambique was one of the greatest experiences of her life.

Each day, the crossing and the breaks in lost villages where “most of people do not only smile, they are shining” gave her the vital energy to go on in spite of the rough route.

Sand, heat, climbs, descents, lakes, palm trees… the feelings are strong and Andréa ends several times with tears in the eyes. “I took the freedom to stop and take photos with the inhabitants, to get really acquainted. Sometimes the children came to walk one moment with us and even when wearing flip-flops, they were sometimes faster than me!”. 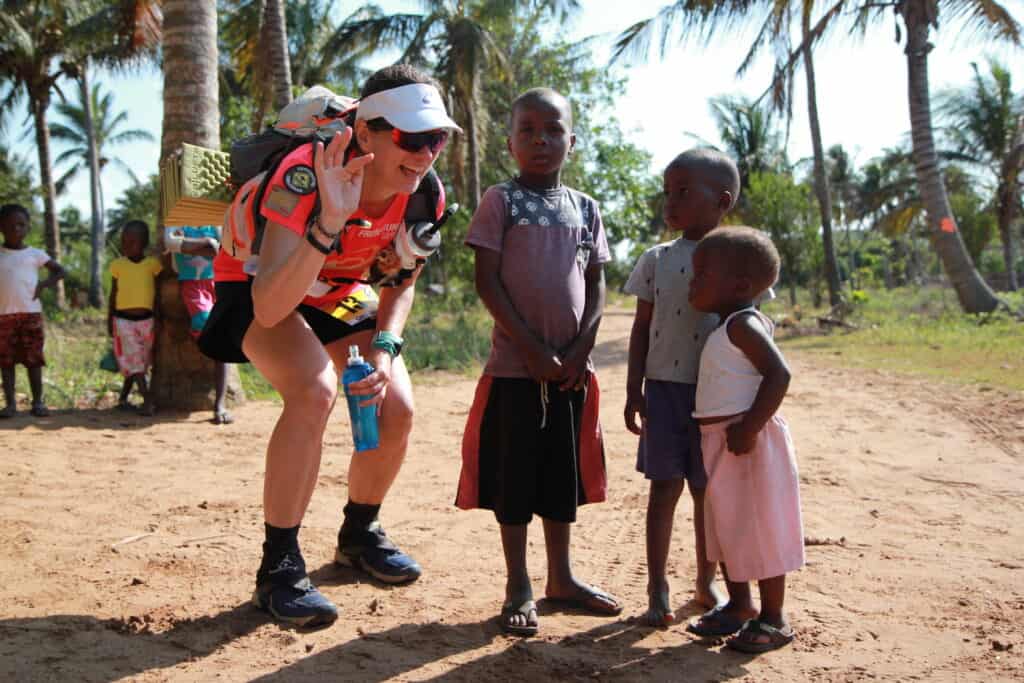 Andréa with children in a village in Mozambique.

The Ultra AFRICA Race is highly demanding but she asserts “I felt happy and grateful for being there, I felt exactly at the right place”.

She underlines that the organization of the race and the small number of runners make a very special competition. “Even if we have no common language, we became a family which suffers and laughs together, helps and encourages”.

Andréa is willing to quote here all her companions adventurers with whom she weaved very strong links. “I will miss the crazy and wonderful staff surrounding Jérôme. But not for a long time”. In March, Andréa will run Ultra ASIA Race in Vietnam and think about THE TRACK in 2019 … 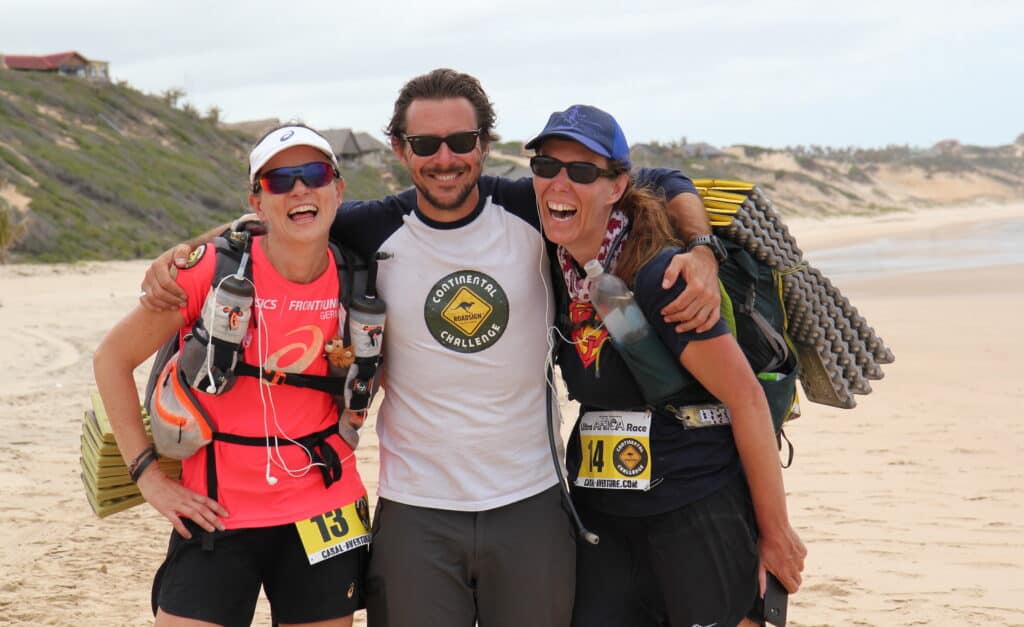 Andréa, Stephanie Bales and Jérôme Lollier smiling after 220 km of competition in Africa.