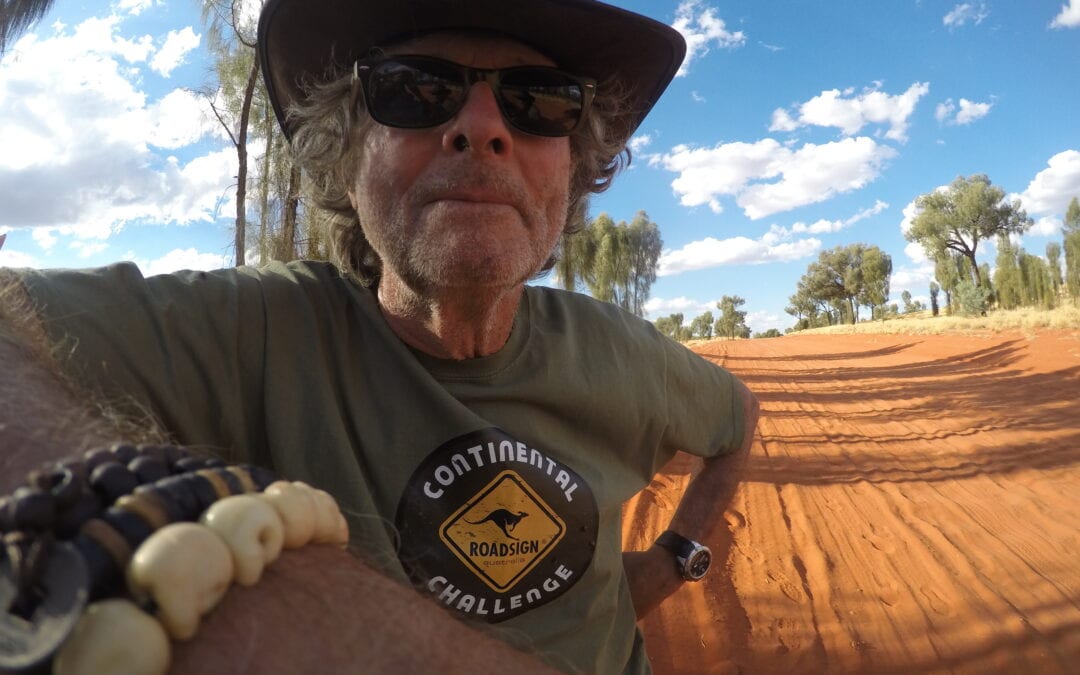 If you follow Canal Aventure, you know that Bruno is the doctor of our ultramarathons. A long career as a generalist and a rich background in running have led him to us. Let’s look back at the tribulations of a doctor who is not as wise as one might think….

[ Story of a traveling doctor ]

A generalist, Bruno Thomas began running in his forties. Motivated by the desire to keep fit, he starts with a few strides around his Bordeaux office. He quickly moved on to semi-marathon and classic marathon… until he discovers in a sports magazine the announcement of the very first marathon in stages and self-sufficiency in the desert. This time, the desire to go elsewhere outweighs the risk-taking. From that day, he will not stop running in mountains and valleys, mixing sweat, memories and friendships on the tracks of Morocco, Reunion, Mont-Blanc, Corsica or China. While running, he observes with interest the work of his colleagues in charge of medical support on the races. 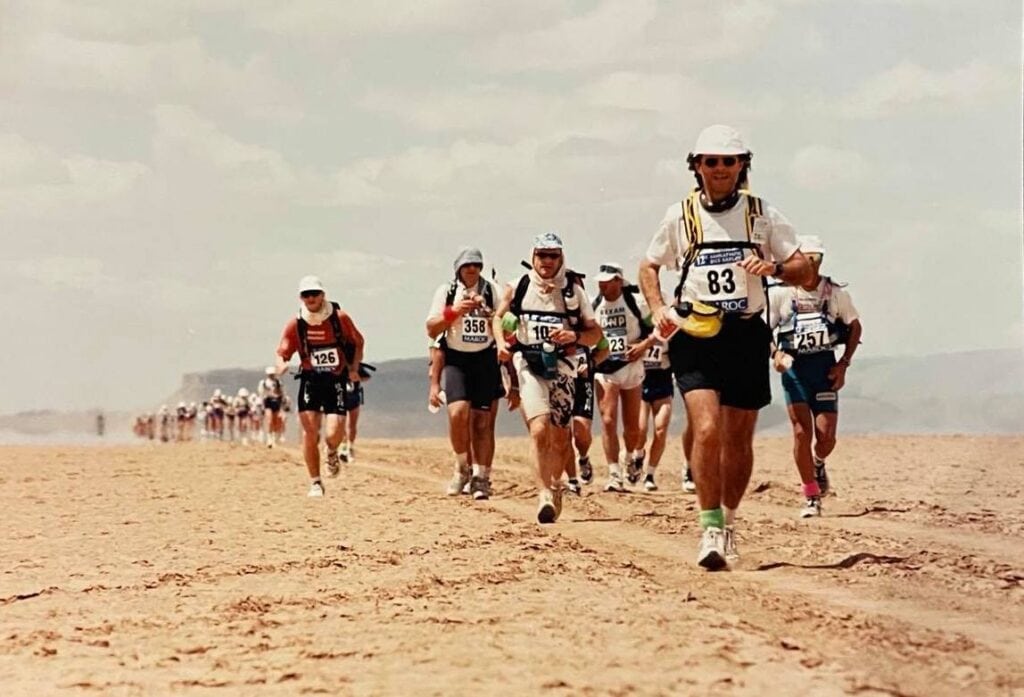 In March 2001, a friendly stay in the mountains marked the end of his life as a runner. Ski fall, two broken vertebrae, tetraplegia, clinical state of death. He owes his “second life” to two doctor friends. After emergency surgery, he begins a long and intense rehab with the precious support of his wife, Francine, and some friends.

“The problem was that I couldn’t run anymore. I was drugged at running “nature” and with any addiction, withdrawal is difficult. Twenty years later, I still haven’t digested it!”

Now walking, he and Francine surveyed the roads of Yunnan, Tajikistan and Iran…. And he begins to support a doctor during a Beijing-Tehran raid…. Before becoming the doctor of raids in Chile, Nepal, Bolivia, India, Mongolia, Cuba, etc. His experience in high altitude medicine will soon lead him to cross our path.

In these pretty athletic raids but “which seemed to me a little bit cushy, with lunch and hotel every night”, Bruno begins to dream of new horizons. Isabelle, a nurse met in the Egyptian White Desert tells about the Canal Aventure events she took part in India and Burkina Faso and the birth of a new race in Bolivia.

His knowledge of the Bolivian’s high-altitude slopes and his need for adventure lead him to make contact. From the first exchanges with Jérôme Lollier, we felt good vibes. In 2014, he will follow us for the first edition of the Ultra BOLIVIA Race on the Bolivian Altiplano. Even better, thanks to his friendship with Jean-Pierre Herry (Head Doctor at the National Ski and Mountaineering School), he offers us to arrive with a hyperbaric chamber!

“When we run the Ultra BOLIVIA Race, it’s winter in the southern hemisphere. We run and sleep in negative temperatures at 4,000 meters high. Trail runners are often more vulnerable to altitude because the faster you go, the more oxygen you use. Fortunately, with the Canal Aventure organization, we arrive 3 to 4 days before, it lets time to acclimatize.” 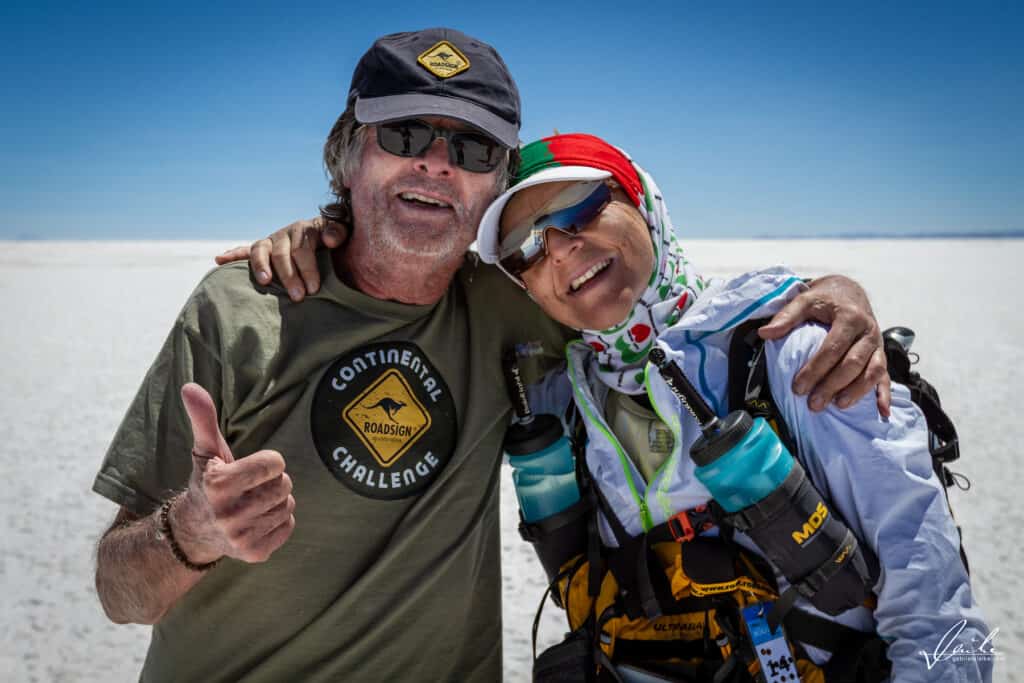 Talking about travel and discovery, altitude is not the main thing that motivates Bruno. In 2015, no question for him to miss the Ultra AFRICA Race in Burkina Faso… even if the timing was somewhat Rock’n’Roll! Engaged in a race in Myanmar, he traced the road via Rangoon, Dubai, Paris and Algiers to reach Ouagadougou in 24 hours.

“Arriving at night, I had an appointment the next morning at the bus station to meet the group in the bush near the Ghana border. A strong link was forged with the team and since then, I have followed all the races of Canal Aventure.”

Bruno underlines his attachment to the values that had pushed him to engage in his first nature marathon: a limited number of runners, self-sufficiency, relations with the nature, the places crossed and the meetings with the local populations. Sleeping in the middle of the desert, waking up at an altitude of 4,000 meters, cooking a freeze-dried dish in the middle of the Australian bush… all this suits him well.

“We form a very small international group with sometimes 15 nationalities represented out of 20 participants.”

Social networks allow him to keep in touch with the whole world and some friendships born during our races have earned him invitations in Italy, Argentina, etc.

[ Doctor, friend and a bit of a wizard…]

Race after race, Bruno has naturally emerged as a bedrock essential to Canal Aventure. He begins by saying “I have found in Jérôme a true friend, younger, efficient organizer and really nice.”

His past as a raid doctor has confronted him with all kinds of situations, from simple sprains to severe dehydration to a fractured pelvis. Defining himself as an old-fashioned generalist, he knows how to adjust his practice to treat small bumps as well as life emergencies. Such a fully rugged doctor… 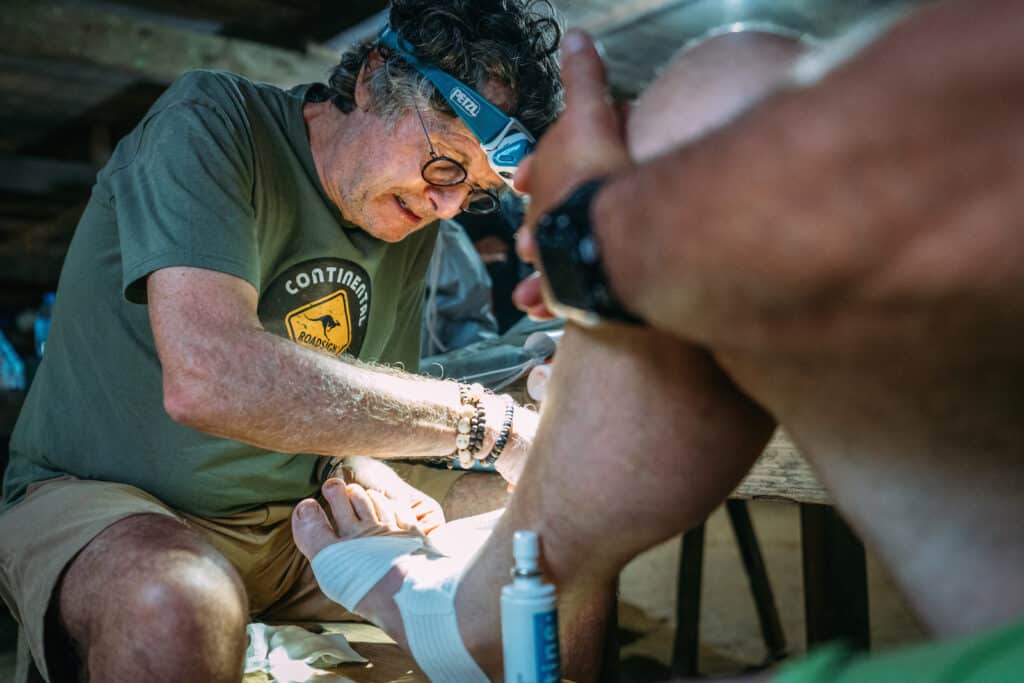 If his past as a runner puts the participants in confidence, his experience, his human approach and his white hair worth him to be qualified as a wise man, a quiet strength or a chibani. Something about him reminds of Rafiki, the shaman and combative mandrill who teaches the principles of the Hakuna Matata in the lands of the Lion King… We guess him experienced, caring, sometimes roguish and daredevil like the day he broke a shoulder during one of our races in Vietnam.

“They are happy to receive help and it is my role to find a solution to make them go well. I’m not that wise, but I like those nicknames.” Over the years, his love of travel and sharing has not eroded. “I continue and now with younger and I like it.”

Sébastien Millérioux, a young doctor who recently joined the Canal Aventure family, confirms his words and says, “I was amazed by his involvement, his wish of sharing his skills graciously and honored of his confidence.” 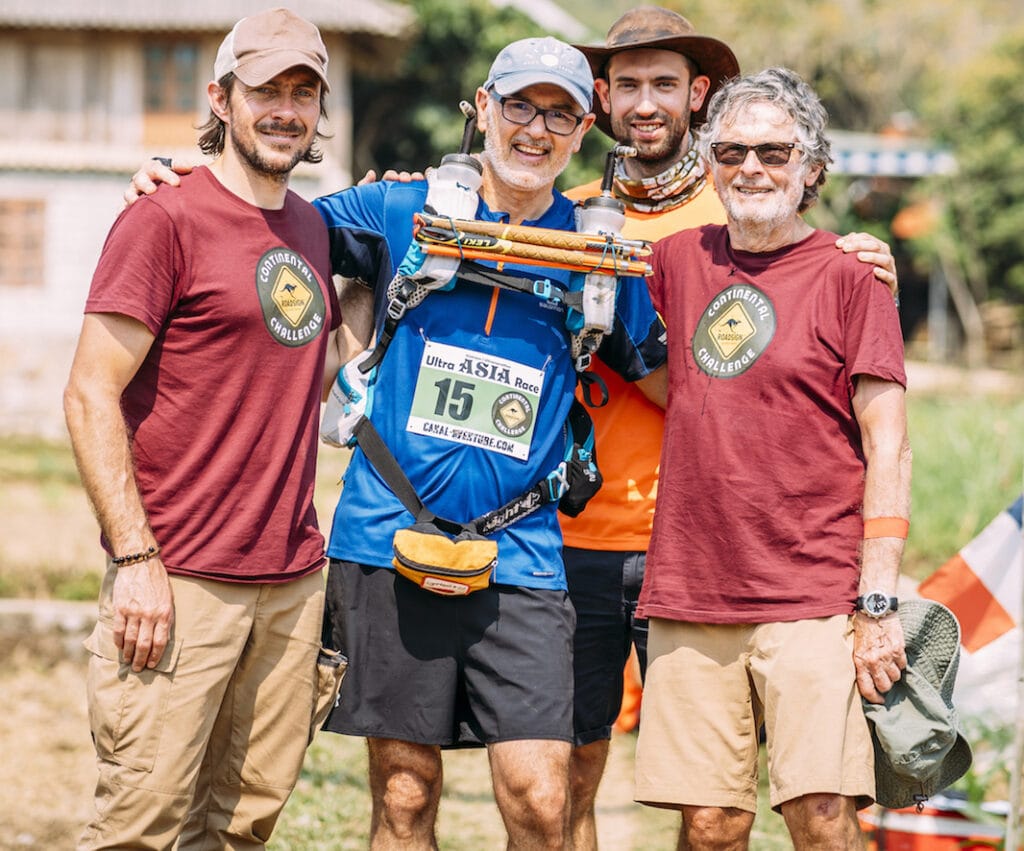 [ It is time for patience ]

Since March 2020, adventure and encounters under far heavens have given way to a sort of «great void». A period that have led Bruno Thomas to measure the extent of everything he has accomplished and experienced so far, as a runner, walker and doctor. Despite the impossibility of compensating the lack of travel by cultural outings that he and Francine like, Bruno admits «I feel rather advantaged to live here, in Bordeaux, with a view of the Garonne.» For the past five years, we get used to celebrate his birthday in March, during the Ultra ASIA Race in Vietnam. For the moment, he does not know how he will celebrate it this year.

Aware that we need to be patient before we can embark again on an adventure, he recalls these incredible birthday parties in Vietnam and stresses “the dreadful effects of rice alcohol”. 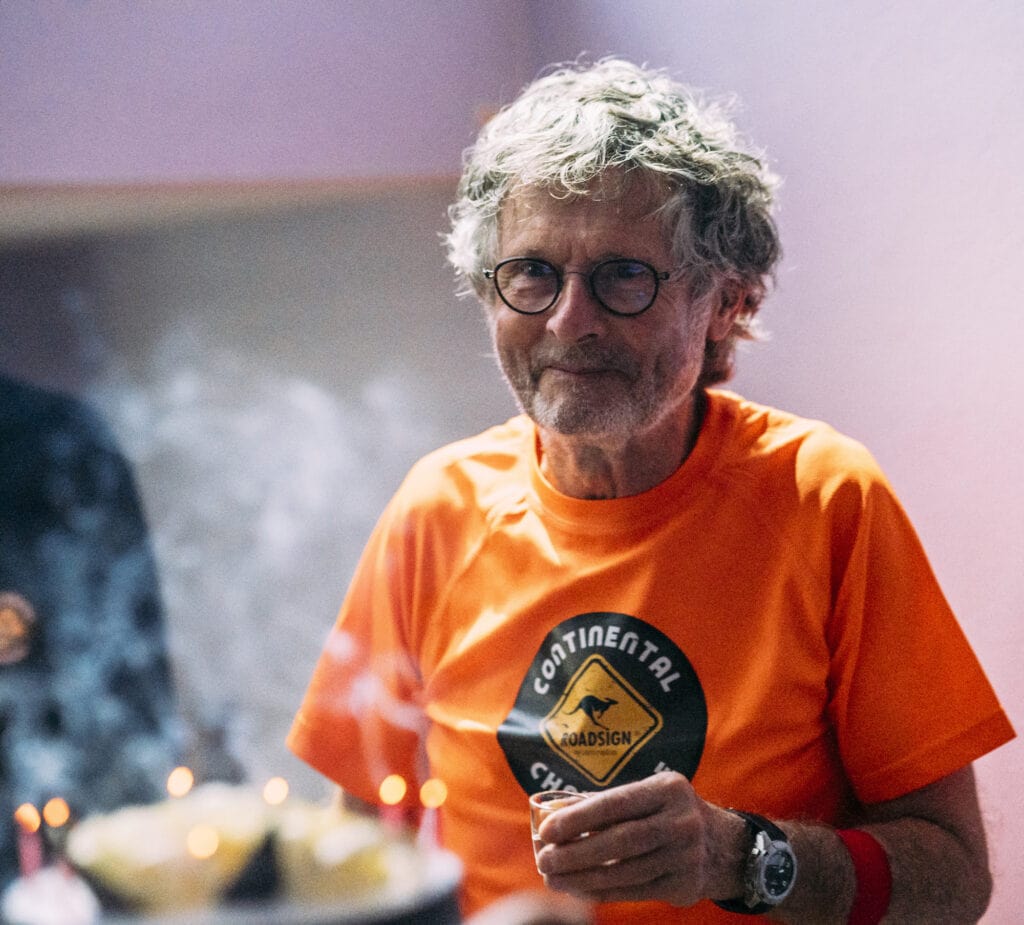