Thanh Vu, first asian woman to be Finisher of THE TRACK

Thanh Vu (Vietnam) worked with Canal Aventure for the Ultra ASIA Race 2016. We were very happy to share the adventure with her. In last february, we were excited when she confirmed her participation at THE TRACK 2017 because we knowed that Thanh is a competitor with a great determination. Thanh was not in good physical conditions for the event but she did it. She is the first asian woman to be Finisher of THE TRACK. > Look at the Final result of THE TRACK 2017

Thanh, You finished THE TRACK, the longest self-supported endurance foot race in the world, What was your first emotion at the finish line?

It was hard to believe that I could finish the race. I knew I would try everything in my power and would never give up unless there is some sort of life-threatening risk. But given that I went into the race with bad knees, I was always nervous at the start of each race “Would today be my last day?”
When I got to the last stage, I knew I should empty the tank and leave nothing left unused. So that’s what I did. 137km was the longest and the loneliest stage as I didn’t see many people or run it with anyone but it was my best stage. It was the only day I felt that I was confident making it to the finishing line. I was pretty much disoriented from the sleep deprivation before crossing the finishing line but when I knew I did it, it was an amazing feeling. I was relieved and in many ways, felt empowered that I had held onto that tiny hope that I’d make it all the way.

What was the most difficult for you during the event?

The distance. Maintaining my body to endure on 522km (and with 3 consecutive days closing to 60km/day) was something I’ve never done before. The worries to meet the cut-off for the difficult days added to the mental toughness you had to have as well

A classic duration for a multi days foot race is 5 or 6 days. What happening for you after the 5th or 6th days of competition? How you manage this second part of the competition?

You really have to just focus on the day itself. As soon as you finish the day, forget about it. Don’t think about how it could have or should have gone. Get on with your recovery and prepare for the next day. With this length and duration, you must move on quickly. No dwelling on anything. Do whatever you got to do and get on with the race.

The last stage is a competition in the competition! It is a stage of 137 km. How was you before this last stage?

I was actually quite pleased to get to the last stage (despite the early 4am start). It was when I knew I’d make it to the finishing line of the entire race no matter what. I could almost say I was excited for it.

You are the first asian woman who finished THE TRACK. Is it important for you?

Yes, I think being the first is a great beginning. When people see that it can be done, they will try and that’s how progress is made. There will be more strong Asian female who can do these races much faster and stronger.

Running in the dark on the last stage. Feeling the drag of the arduous 8 days before and the lack of sleep, I was pretty drained. But as I looked at the magnificent sunset and the majestic Mt. McConner, I felt grateful for being able to be there. I felt such revival of energy in me and all of a sudden, I really could ran.

One word to descript this competition? 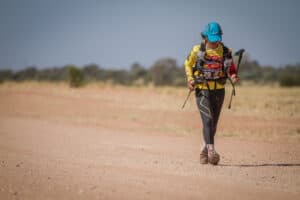 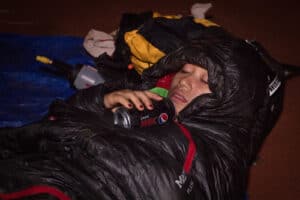